Jordan Mahaffey was just a normal 24-year-old woman, getting ready to graduate from the University of West Alabama with a bachelor’s degree in history and anthropology, when she woke up one morning, in the fall of 2013, with what appeared to be a sinus infection. She went to the doctor and got treated for a standard head cold.

But the normal treatments for a sinus infection continued to fail at offering Mahaffey any relief. Doctors told her many diagnosis, nasal polyps, a severe sinus infection, and many more but she knew that something wasn’t right. Mahaffey, being a strong- willed, determined, and calculated young woman, decided to get another opinion. Eventually, on Mar. 25, 2016, she was diagnosed with Stage Four Nasopharyngeal Carcinoma, a rare cancer of the head and neck, that when diagnosed in Stage Four has only a 38% survival rate.

There was no time to cry, no time to be devastated by the knowledge that she had cancer. Mahaffey was shuffled from doctor to doctor, beginning treatment quicker than she could say Nasopharyngeal. The only thing she could tell herself was that at least, “there is no better time to have cancer than now,” banking on the technology and doctors at the University of Alabama Birmingham, where she was treated every day for months.

Finally, seven months after her initial diagnosis, she had her last treatment in September of 2016 and this year, turns 27 and celebrates two and a half years with no evidence of disease.

Her advice to those struggling with any type of diagnosis is, “Don’t be afraid to be negative, there is this overwhelming pressure to be positive when you have cancer. Don’t be afraid to say, ‘I have cancer and it sucks’.” And for the family and friends who struggle with knowing what to say to a person with cancer, Mahaffey says, “It’s okay to not know what to say… just tell them that but also say that you’re there for them.”

As for Mahaffey’s future, she plans to have a party when she hits her five-year cancer free mark because to those who have almost lost it, every day of life is worth celebrating.

This stereotype is all too often what people think when they see student-athletes, especially, when you’re a 6-foot-4-inch, lineman.

Michael Faulkner transferred from James Madison University to the University of West Alabama this 2019 spring semester to pursue more time on the football field, but he wants people to know he is more than just a stereotypical athlete.

Faulkner is a Jacksonville, Florida native whose family moved to Georgia when he was just three years old. Naturally, being from the South, he is no stranger to the importance of football.

At the age of 21, Faulkner made the decision to transfer from James Madison University (where he spent the last two years) to UWA to pursue better football opportunities.  And while his ultimate goals extend beyond the hash marks, they do not stray far from the field.

“Sure, I would love to play in the NFL,” Faulkner said, “If I had my choice I’d play for the New England Patriots… but nowadays you have to be realistic.”

When asked about his future plans if he doesn’t make it to the National Football League, he responded without hesitation.

He explains how watching ESPN confirmed for him that sports broadcasting would be a perfect fit for his career choice. He admitted he loves talking and goofing around, but he also loves delivering news about something he cares about. Sports broadcasting combines the best of both worlds.

Aside from the influence sports has had on his life, Faulkner said, “I don’t think I’d want to be a football coach in the future. I don’t want my future kids to feel pressured to do anything they don’t want to do.”

Faulkner describes himself as a big but chill, down-to-earth guy that loves to watch “Naruto”.

Keep an eye out for this 6-foot-4-inch, offensive lineman on the field for the Tigers next season and perhaps one day on ESPN.

CLICK TO READ: Sedona, Arizona: The most beautiful place in the world

The drive into Sedona, Arizona, is mostly unextraordinary. On the way from Phoenix, the capital of Arizona, there is a progression from houses and shopping malls to desert and cactus.

The four-lane highway turns into a two-lane interstate surrounded by nothing but the occasional family-owned farm and restaurant. Only the standard browns and rare light greens of the desert, along with the squiggly lines on the horizon from the intensive heat, are there as landmarks of what is being left behind.

All of a sudden, the temperature drops 15 degrees, and the green becomes more and more apparent. Eventually, huge mountains engulf the horizon line as the landscape begins to change.

Then the interstate corner that hides the beauty from the rest of the world is turned, and bright reds flood through the windows from all angles.

Sedona, besides being one of the most beautiful places in the world, also happens to be one of the few places around the world that is home to energy vortexes.

According to Ron McLain of Secret Mountain Tours in Sedona, a vortex is “simply a concentrated place of energy. Any concentration of energy can be called a vortex.” However, McLain believes that the vortexes in Sedona are on a “different level.”

“These vortexes are formed by the Earth, for its own purposes and in its own geological time,” explained McLain, “We can find them and use their energy for what we want to accomplish. But they are not about us, but we can use the power”.

There are many experts located throughout Sedona that have many different interpretations of vortexes. However, Kegn Moorcroft, Sedona native and Director of Communications for the Sedona Chamber of Commerce, shares a locals’ opinion when it comes to the power of Sedona.

“Sedona draws people in like a magnet,” says Moorcroft, “Sedona is super powerful and breathtakingly gorgeous.”

Moorcroft has lived the majority of her life in Sedona; however, she moved away from her home for 10 years.

During this time, Moorcroft traveled went to school and lived overseas away from the spirituality of Sedona, only to return back to her roots and to the home of the vortexes.

“I’ve heard from many that Sedona’s vortexes impact and influence positive life changes, a feeling of balance and grounding, and a feeling of love, healing, peace, quiet, etc.” explained Moorcroft, “I attribute these feelings to vortex locations being on top of mountains, meaning endorphins are released from exercise and feelings of glory are experienced.”

There are many different perspectives on what causes this change in energy and feeling once someone crosses the threshold into Sedona. But the best tell that there is something different about it, is simply the testimony from those who live there.

“Living in Sedona is much more beneficial to me than living anywhere else,” Moorcroft said, “Sedona is a vibrant, friendly city, with a small-town vibe. I love meeting visitors and running into friends wherever I go. I practice yoga and meditation, and I hike and rock climb often.”

Sedona is a unique and different place, not only because of its cleansing energies and lifestyle but also because of the people who live there.

Moorcroft explained that most people who live in Sedona fall into three main categories: spiritual, adventurous, or artsy.

Sedona is exposed to an average of three million visitors a year, in comparison to its small 10 thousand residents.

This means that the locals have to work hard to maintain the beauty of their home, this includes teaching visitors about sustainability, dispersing tourists from popular areas, and spreading tourism more evenly throughout the year.

While the beautiful vistas and thriving art community attract tourism that provides jobs and funding for the locals and their homes, it also poses some issues for the sustainability of the area.

In an article published for Travel Pulse, Sedona’s mayor, Sandy Moriarty, commented and provided information on their efforts to make Sedona a leader in sustainable tourism.

Not only does the mayor play a role in this, but the Chamber of Commerce also does.

“At the Chamber, we do our best to disperse visitation from the most popular areas, such as Devil’s Bridge, West Fork, Cathedral Rock, and Fay Canyon,” said Kegn Moorcroft.

Moorcroft shared some examples of visitor dispersion campaigns, which helped to move visitors from some of the more popular destinations to the lesser-known areas in Sedona.

All of these things are what makes Sedona unique. From being the home of the vortexes to spearheading sustainable tourism efforts, Sedona is home to beauty, innovation, and spirituality.

The beauty is breathtaking, the energy doesn’t lie, and the people speak for themselves; Sedona is one of the most beautiful places in the world.

Make the trip to Sedona, but remember, don’t get discouraged on the drive up there. The beauty is hidden, but the magic is unforgettable. 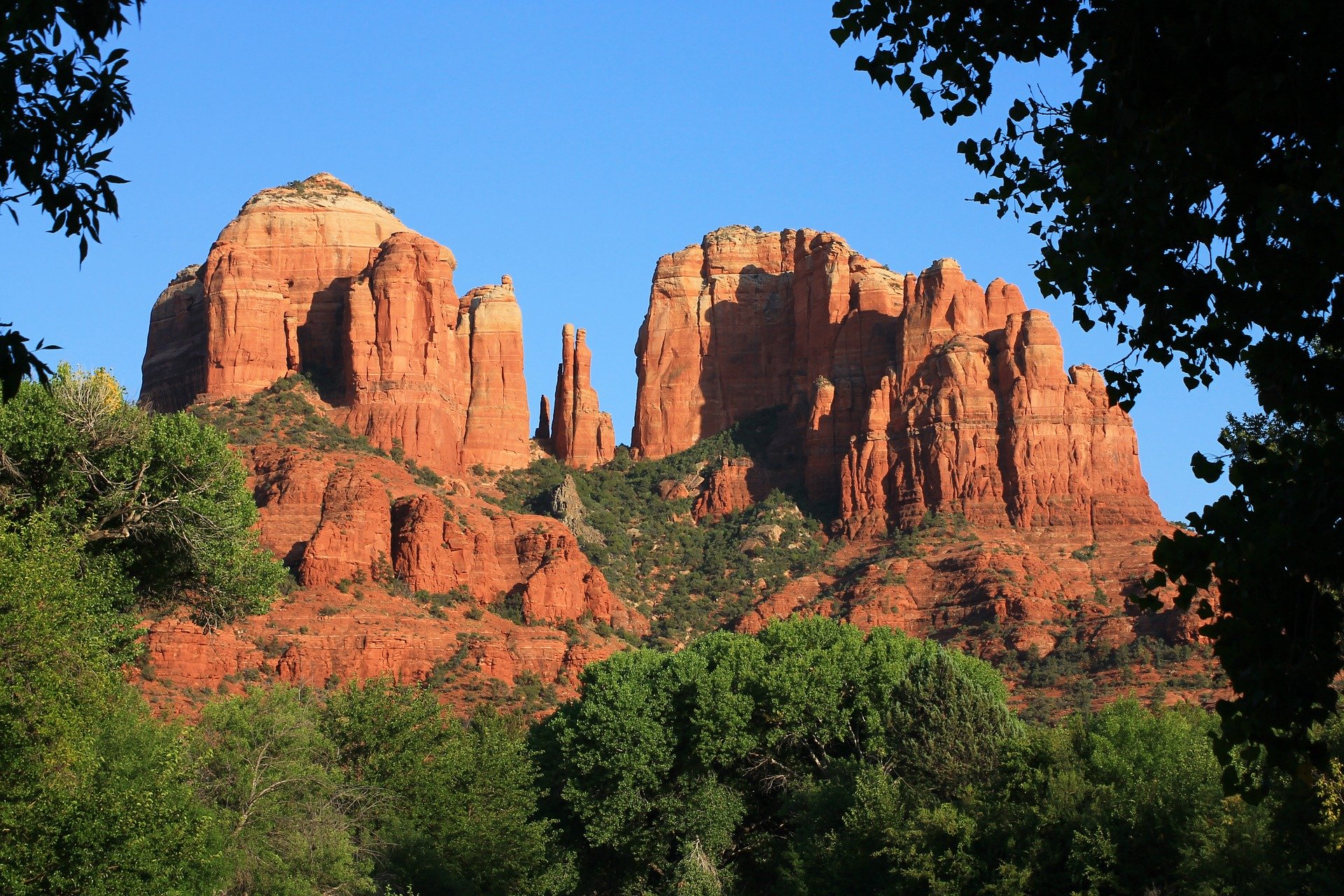 Image by psyco72 from Pixabay